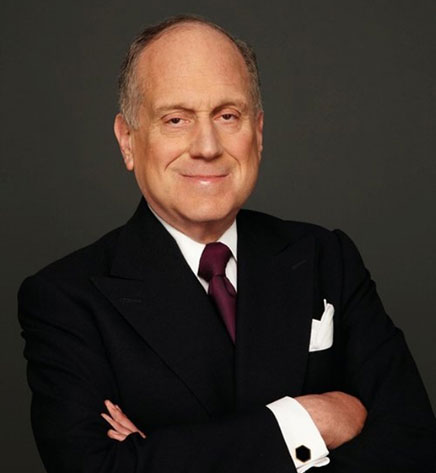 BOARD OF DIRECTORS & STAFF

International philanthropist, diplomat, public servant, entrepreneur, investor and patron of the arts, Ronald S. Lauder is deeply committed to his Jewish heritage and has worked tirelessly to help the Jewish community, worldwide, through a wide range of philanthropic and professional endeavors.

In 1983, Mr. Lauder began his public service career when he served as Deputy Assistant Secretary of Defense for European and NATO Affairs.

In 1986, he was appointed U.S. Ambassador to Austria, by President Ronald Reagan. Upon his return from Vienna in 1987, he established The Ronald S. Lauder Foundation, which now maintains 35 Jewish schools, kindergartens and summer camps throughout 15 countries in Central and Eastern Europe.

Over 7,500 children are enrolled in these schools today, and 2,500 children attend the summer camps. Over the years, the Foundation has educated more than 30,000 children in a region that was sadly devoid of Jewish learning during the Communist era and this has, in turn, helped build thriving Jewish communities throughout this area.

In June 2007, Mr. Lauder was elected to lead the World Jewish Congress, and has served as the organization’s President ever since. In this capacity, Mr. Lauder meets with heads of countries, diplomats and religious leaders around the world, representing Jewish communities in 100 countries.

In 1986, Mr. Lauder visited Auschwitz-Birkenau for the first time and was shocked to see that the camp had fallen into a terrible state of repair. Worried that the artifacts were disintegrating and would not be available for future generations to see, he immediately brought conservators from the Metropolitan Museum of Art in New York to help preserve these historic objects. Mr. Lauder spearheaded the international campaign that raised $40M for the preservation of the remaining barracks of Birkenau, as well as the mountains of shoes, suitcases, eyeglasses and other personal item that the Nazis took from Jewish inmates before they murdered them. Mr. Lauder believes this effort is of utmost importance in an age of Holocaust deniers and growing anti-Semitism throughout the world. Soon, the last eye-witnesses of the Holocaust will no longer be with us and the camp will stand as the only testament to what took place. For all these reasons, Mr. Lauder believes the integrity of the camp must always be maintained.

Joel Citron is Co-CEO and Principal of Tenth Avenue Holdings, LLC (TAH). Prior to founding TAH in 2008, Mr. Citron spent 24 years as an executive of several operating and investment companies. Mr. Citron has served on the Board of Directors of many public and private companies in Europe and the United States.

Mr. Citron is actively involved in philanthropy. He is the past President and current executive committee member of the Board of Trustees at the Abraham Joshua Herschel School in New York (Nursery through 12th grade).

Mr. Citron is a board member of the Birthright Israel Foundation, the USC Shoah Foundation, Paideia – the European Institute for Jewish Studies, and Starfall Education Foundation. Mr. Citron holds an M.A. in Economics and a B.Sc. in Business Administration from University of Southern California.

Dr. Maria Zalewska is a nonprofit executive, Holocaust educator, media scholar, and author with an 11-year track record of strategically planning, developing, and funding cross-institutional Holocaust educational projects, as well as developing media projects from pre- to post-production. Her academic work has focused on the relationship between interactivity, visual studies, and Holocaust memory. Her research develops new directions in Holocaust studies and innovative responses to the challenges facing Holocaust education in the digital age.

After receiving her M.Phil. in Russian and East European Studies from University in Oxford, Dr. Zalewska has provided operational and strategic leadership to ABMF while completing her Ph.D. and teaching undergraduate students at the University of Southern California’s School of Cinematic Arts. Dr. Zalewska has developed strong strategic partnerships between Holocaust educational institutions in the United States and Europe. She currently holds the title of the Honorary Consul of the Auschwitz-Birkenau Memorial and Museum in the United States of America.

In addition to her professional appointments, Dr. Zalewska wrote and produced a film that premiered at the 75th Anniversary of the Liberation of Auschwitz and was broadcast live on over 250 channels in over 50 countries. Dr. Zalewska served as a member of the Peabody Awards screening committee for six consecutive years (documentary media category); in 2019, she was the head organizer of Visible Evidence XXVI, the international conference on documentary film and media.

Maria was born and raised in Warsaw. Her great-grandfather was killed in Auschwitz.

Gosia Szymanska Weiss is a not-for-profit professional and consultant who specializes in Polish-Jewish relations. She grew up in Lodz, Poland, and belongs to the generation of Polish Jews who discovered their Jewish roots in the early 1990s, following the fall of communism. Before permanently moving to the United States, Gosia was Managing Director of Beit Warszawa, a progressive Jewish community in Warsaw, and was on the board of the Polish Union of Jewish Students. More recently, she served in leadership roles at American Jewish Committee (AJC) as Associate Director of the Los Angeles Region and nationally as Senior Associate for Polish-Jewish Relations. Gosia is a graduate of Hebrew Union College – Jewish Institute of Religion and the University of Southern California with a double master’s degree in Jewish Nonprofit Management and Public Administration.  She is the recipient of the Knight Cross of the Order of Merit of the Republic of Poland. She lives in Los Angeles with her husband and two daughters.

MEMBERS OF THE BOARD